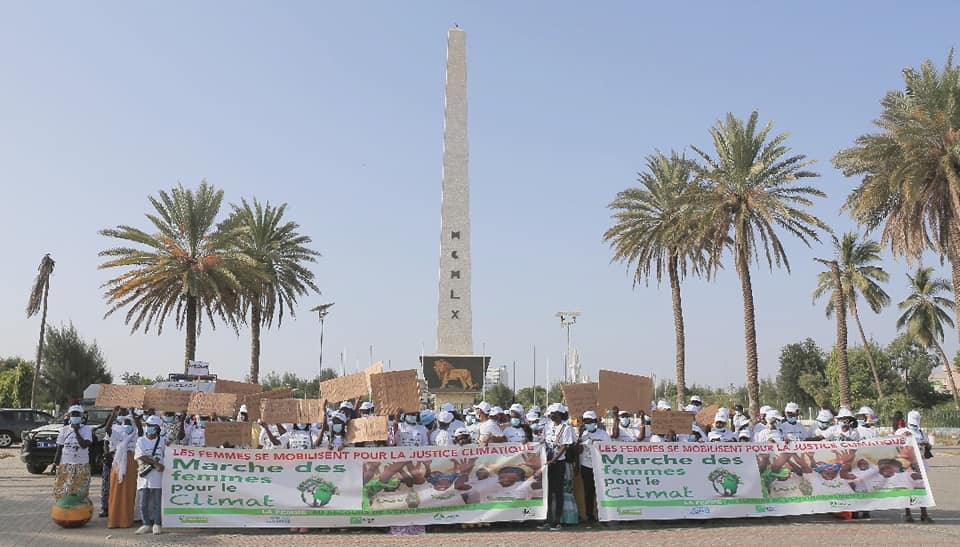 Some one hundred women from different areas across the West African country of Senegal gathered in the capital Dakar on 24 October 2021 to march for the climate ahead of the COP26 in Glasgow. Responding to the call by the environmental association Vacances Vertes, they demanded ambitious action against climate change as its effects are already posing severe challenges in their daily lives: disruption of seasons and ecosystems, food insecurity, poverty, pollution, loss of biodiversity.

Vacances Vertes promotes environmental education among young people and women to develop a culture of environmental protection. It has been working on these issues since 2017 when it was set up during the school holidays, coinciding with the winter season and the most favorable conditions for reforestation activities. The driving force behind it is Khady Camara, a journalist, and environmentalist, now fully dedicated to environmental work to fight climate change through support for women in Senegal.

You organized the Women’s march for climate – a first of its kind initiative in Senegal. What is the reason to take to the streets with your message?

I decided to meet the women and tell them that all they are going through today – for example, the infertility of the land, the salinization of soils, air pollution, droughts, the land that has been tortured and is no longer able to produce – these are all effects of climate change. We have to rise up and we have to rally in Dakar the week ahead of

COP26 and to make the voice of Senegalese women, of African women, heard so that world leaders know that commitments made in Paris in 2015 must be respected, and without delay. Unless we act, we will perish. And we don’t want to perish. We want to act, but we cannot act if others continue to pollute.

On that day these women chanted “Climate justice, climate justice” because what they are experiencing is climate injustice. Africa produces only 4% of greenhouse gases, and yet, it is the continent that suffers the most from the effects of climate change today. That is unfair.

How did you connect with women from so many different areas?

Climate change is the root of almost all disasters we are experiencing today – natural, industrial, and even sanitary. The Covid-19 pandemic is another example. So it is crucial that we try to deal with these effects, whether through adaptation measures or mitigation measures. For our African countries, particularly in Senegal, where we don’t have a lot of means, reforestation remains the simplest and most effective way to reduce greenhouse gases.

Vacances Vertes has been working on this and we had already started visiting the regions in 2017 our focus was Dakar; in 2018 – Kaolack, in 2019 – Fatick. With the help of mayors, we visited all the municipalities of the regions. This is how we forged relationships with women’s associations in the field.

In 2020 in the midst of the pandemic you launched the initiative “One woman – one tree”.

We have been planting trees since 2017, but we realized that there was not enough follow-up monitoring. So we changed our strategy: we now entrust the reforestation efforts to women and since 2020 we have focused all our energy on women. We launched the campaign in the capital Dakar to tell women “We trust you”. We realized that any project which doesn’t involve women – all the experts in the world are unanimous, is already doomed to failure.

We provided 100,000 trees to the women of Dakar and were able to plant them with women’s associations in the capital. When we revisit the planting sites we see that almost 80% of the plants have caught on and seeing them grow warms our hearts.

Is climate change affecting women in a particular way?

In Africa, 70% of rural women are economically active in agriculture. The land has the face of a woman. We have to take good care of the land so that it can give us what we need in return. We rely on the fertility of the land.

In Vacances Verter we say we must empower African women, particularly Senegalese women, through green entrepreneurship. The realities on the ground are coastal erosion, rising water levels, salinization of the land.

I have always said that I am against the masculinization of the Earth. That means the use of pesticides and chemical fertilizers; the use of machines that torture the land. On the ground in the rural areas, we realize that it is the multinationals that develop the so-called agribusiness. And agribusiness is killing African agriculture – this subsistence agriculture which has always enabled families in the rural parts to be able to survive and garner hope for tomorrow.

Africa is one of the places in the world suffering from the worst impacts of climate change. What is the situation on the ground?

We mustn’t forget that the environmental crisis is today combined with a health crisis, but also of a social and economic crisis for which people pay a heavy price.

The harvests are not as abundant as they used to be. Traditionally, women here grow millet, peanuts, sorghum. For example, if they produced 10 tonnes a year ten years ago, today they cannot even produce a tonne. How are they going to survive?

Khardiata Ndoye is a Women’s Rights Officer at ActionAid Senegal. Present in the West African country since 2001, the local branch of the international non-governmental 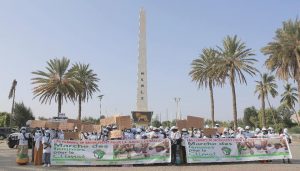